Yesterday was Giving Tuesday, which falls on the Tuesday after Thanksgiving each year. Typically, Giving Tuesday is intended for people to donate to nonprofit organizations, and where nonprofit organizations reach out to others for donations to their cause. Well… We decided to do something a bit different this year—instead of asking others to give to our organization, we wanted our organization to give to others. So, a group of our parents cooked up a few batches of champurrado while others provided pan dulce, and our mentors and teens had the opportunity to deliver them to anyone who wanted some in the Azusa area.

Now, I thought this was a cool idea from the start. One of the biggest desires we as mentors and staff members have for our teens is that they develop hearts for loving and serving their community. So when the idea was presented that we do the exact opposite of what we’re supposed to do, by giving and asking nothing in return, we were all pumped. And as I reflect on this amazing night of service, it turned out even better than I’d expected.

Fresh Pan Dulce and hot Champurrado provided by our parents. Personally Delivered by our teens and mentors.

One of the most impactful moments of the night happened when a woman reached out to us on Facebook asking us to make a delivery to her friend. It was the biggest order of the night—10 servings of champurrado and pan dulce–and also came with the request that we pray for whomever we were to meet. So three teens, another mentor, and I started pouring the champurrado and bagging the pieces of pan dulce and headed on our way, our hands warm from carrying two cups each. We laughed as we drove there because we had no idea what to expect—were we going to a party? Did the people there have any idea that we were coming? We felt awkward that we were about to just show up on a stranger’s doorstep.

When we arrived, we met the older woman who lived there and explained to her who we were and that her friend had sent us to deliver the treats to her. At first I spoke to her in English, but after I explained she asked one of our teens in Spanish to repeat it, so I repeated myself in Spanish. She was a little confused as to why 10 cups of champurrado were sent to her because she was the only one home, but eventually warmed up to it. As our conversation continued, we told her that we had also been sent to pray with her, and asked if there was anything specific we could pray for. She told us that her husband was sick and that her son was doing drugs, and that she’d like prayer for all of the needs of her family. With that knowledge, we began to pray, and it was a powerful experience for all of us.

Personally, it was an impactful moment simply because everything happened in Spanish. The woman, the teens, the other mentor, and I all understood Spanish, so for a rare moment English was not needed. I prayed and thanked God for the opportunity for us to all meet and be together, and asked God to help her family and also give her strength and patience and hope. By the time we finished praying, the woman was in tears and so were some of us. It was a moment of beautiful intimacy with a woman we’d just met, as we all stood humbly before God. She encouraged us and talked to us more about her family and God. After this she blessed us, and we hugged and said our goodbyes.

We all walked out and for a few seconds there was silence among all of us, still processing what had just occurred. One teen broke the silence, “Bri, your Spanish is so good!” Haha. I thanked her and felt happy and relieved—I never know if what I’m saying is comprehendible. It was one of those rare times where there weren’t any hiccups in conversation. A sixth grade boy commented “Yeah, but I kept waiting for you to pray for felicidad (joy/happiness).” I thought to myself, I should have had him pray! When we got in the car I asked the teens what they thought about the experience, and they had nothing but good words to say. They all wanted to do something like this again, and thought that what had just happened was amazing. It was a proud moment for me as a mentor to see all of our hearts so filled by this moment of love and service to another person. This was just the sort of experience and reflection we hoped our teens would have.

As I said before, Giving Tuesday was even better than any of us imagined it would be. What started as a small “crazy idea” turned into a coordinated effort between parents, local businesses, teens and mentors who prepared and delivered the treats to people around the community. Don’t get me wrong—I completely respect all of the nonprofits that chose to take advantage of Giving Tuesday to raise funds for the amazing projects that they have going on in their communities, but I wouldn’t have traded any amount of money we could have raised today for the experiences and transformations that took place in the hearts of our teens. They were able to be a part of making the world slightly better today than it was yesterday. They got to hear several people they didn’t know before say “You made my day!” They got a taste of what it means to love others more than self; And THAT is priceless.

At the end of a long day of service, I had nothing but joy and gratitude. On behalf of MYTHIRDPLACE, I’d like to say thanks to everyone who made last night possible—the parents and guardians of some of our teens who provided champurrado, and Alondra’s Bakery for providing pan dulce. I also thank God for opportunities like this to serve alongside these teens that we love and make a difference in our community. I’m personally looking forward to more opportunities for us to serve and love our community in simple ways, and am excited to see our teens continue to grow in love and selflessness.

Thanks again to Alondra’s Bakery for making our Giving Tuesday Possible! 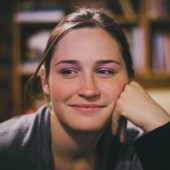 All stories by: Greer Briana