A 16 year old Junior in high school, Ashley has been attending MYTHIRDPLACE literally since day one, though she hasn’t always loved it. On the first day that M3P was open, her mom actually made her go. She was angsty, angry, and anything but pleased with this forced attendance. As it turns out, to add to the already burning desire to be anywhere but at MYTHIRDPLACE, she had showed up on a middle school day. But, along came Adrian, our uniquely crazy and unashamedly outspoken leader. He tried to spark conversation, look for common and relatable interests, but nothing. He pulled out every trick he’d learned working with youth for the previous ten years, but still nothing. “Come back tomorrow on a high school day,” he encouraged. But she made it quite clear that she had no interest in joining the ‘MYTHIRDPLACE Family’ or anything like it. She says she even vividly remembers telling him that she would never EVER come back. (You can probably guess from the existence of this article that this wasn’t quite what happened.) Somewhat discouraged, being the first day and all, Adrian accepted the unfortunate reality that he’d probably never see her again.

The very next day, Adrian remembers getting things set up and ready for day two. Being just ten minutes prior to the start of programming, he was a bit anxious because there were no teens present at that point. Just a couple minutes later, however, he looked off into the distance through the window and saw what appeared to be a high school aged gal making her way toward M3P. As the figure got closer and closer, his confusion, disbelief, and excitement grew exponentially. “There’s NO way that’s Ashley,” he thought to himself. But when Ashley indeed walked through the door, he had to face the facts.

“What are you doing here- that’s not what I meant,” he corrected himself.

“I decided to give it another try,” she said with a straight face just barely holding back a smile.

“Ayyyyyyyyyyyyeeee,” Adrian yelled out while giving her a big hug. (This probably didn’t make the situation much better, but it made her crack a smile.)

Ashley came back that day and now, not only does she attend MYTHIRDPLACE on the designated high school days, but the middle school days as well. Matter of fact, Ashley has spent more time at M3P than any other teen. For these past 2.5 years, MYTHIRDPLACE truly has been her third place everyday after school.

Ashley is certainly a very special young lady with a big heart and even larger aspirations. After high school, she hopes to go to college, potentially at Cal State Fullerton, to study social work. But before she gets there, she has a whole lot of time to spend with the fam at MYTHIRDPLACE and has a lot to say about it.

Her love of people shines through almost all she says and does (hence the social work studies.) In fact, our interview was pushed back a bit because she was busy helping distribute tasty goodness to the Azusa community for M3P’s Giving Tuesday. ( Another great story that you can read about HERE) This love for God’s children is also apparent in her favorite part of M3P, ‘Agora’ Hour, which is a time for students to share about their day and have the opportunity to discuss some topics relevant to their community and our world today. Her favorite memory with M3P was (and is) our Annual FAMCAMP retreat during Spring break because of the discussions held around campfires and the fellowship she finds there. (And you can find out more about FAMCAMP HERE)

MYTHIRDPLACE has had a huge impact on Ashley’s life, not only personally, but also academically. Since she has been in the Fam, she is able to identify that her character has developed because “M3P is a place where you can go and forget all your problems and you don’t have to worry about things.” In not having to worry, she has expressed her joy at being given the freedom to grow her personality and discover herself without life’s worries. Academically, she identified that the program has encouraged her to get on top of her studies. Her grades have gone up significantly throughout these past years, which we always salute!

Ashley is the type of young woman who, you can tell right away, is going to do mountains of things someday, as she is already doing so right where she is. When asked if she could say one thing to the M3P mentors and staff, her immediate response was, “Thank you. Thank you for being here and just spending your time here and getting to know the teens here, even though you don’t have to be here. You choose to be here. And I just want to thank you for that.”

Ashley, We love you. 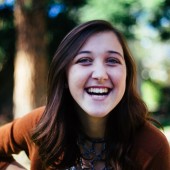 All stories by: Michaela Steiner