You know those moments in life when God tells you something BIG is about to happen? And gives you AT LEAST a month’s notice to prepare? And He tells you EXACTLY why that ‘thing’ is so important??? No?!?  Yeah… Me neither. So when my church decided to partner with an organization called MYTHIRDPLACE a few years back, I had no idea it would bring with it so much chaos.

As a God-fearing mathematician, I’ve come to recognize chaos as simply a complex system that has yet to be explained and, though usually tied to negative implications, can be good or bad. For me, M3P was both. On the one hand, M3P opened my eyes to the hurting and the needs of the Azusa community as well as revealing some of the systematic injustices facing our society in general. On the other hand, if you’d asked me just before that point, I would’ve told you with 100% confidence that my eyes were already wide open, I knew exactly what I was doing, and I was surely able to maintain some semblance of control with all that was going on around me. Boy, was I wrong…

I’d started volunteering at Foothill Community Church (FCC) as a sophomore attending Azusa Pacific University (APU), after having grown up in a culturally homogeneous church in Oregon. I attended every youth camp, retreat, fundraiser, and weekly evening worship service with my youth group back at home, and they quickly became my second family. A family who was there for me through every Breakup and every Why-Would-God-Let-Me-Fail-That-Test Crisis.

After moving to Southern California, I knew I wanted to attend a church where I could be a part of a youth group that offered similar support to the next generation. Though FCC was significantly smaller than my Oregon church, I immediately felt right at home amongst the congregation. I was soon welcomed as a volunteer into the youth group and quickly rose to become one of the most consistent and key leaders on the team. Our youth group was small, but I felt like I could easily relate to these teens who had mostly grown up in The Church, with both parents, within middle-class homes.

After about a year of working with FCC and planting roots in the youth group, a ‘strange’ man named Adrian (Hehe.) came to share a bit about this new organization he’d started for teens in Azusa. I thought to myself,

Oh, that’s so cool! I work with ALL 10 of Azusa’s youth every Wednesday night!

Haha. Then, he started talking about how hundreds, thousands of teens in Azusa go without food, guidance, positive influences, and/or a place to belong while their parents work overtime trying to make ends meet.

Wait, what? How did I NOT know this was going on? I live at APU in the MIDDLE of Azusa! APU students are a PERFECT reflection of the surrounding community and yet none of them deal with this kind of stuff. Shouldn’t these teens be saving up for their African mission trips or mentally preparing for a DTR?

Adrian continued to talk about the gang violence that threatened Azusa’s teens, as well as the oppression that many of the students and their families faced. He told his story about growing up afraid to walk on the wrong side of the street and how God had told him to create a place he wished existed for teens going through some of the same things he went through.

As he spoke, all I could think was,

Thank goodness I haven’t been called to THAT kind of ministry! That sounds hard.

Fast forward two and a half years, I now joyfully serve as accountant, Wednesday night chef, and a long-standing mentor at MYTHIRDPLACE.

After seeing the heart of its mission and fruit of its work, FCC began to invest in and partner with MYTHIRDPLACE. This brought about a transition that was rocky at best as dozens of new teens found a home within the M3P Fam on FCC’s campus. Both leaders and youth had to broaden their definitions of family and community to include those outside their norms. All sides were called out on their biases and forced to take a hard look at themselves and how God might be calling them to love and serve.

As I transitioned from an FCC youth leader to a M3P youth leader, I felt the roots I’d planted being ripped out from the ground. Where I once felt so comfortable with our teens, I now had no idea how to relate to them. Though I’d faced my own demons in life, they seemed miniscule in comparison to those faced by some of these teens every day. How could I talk to and serve youth who I shared so little in common with? I struggled with this for quite some time, and even considered quitting because I felt so out of place. Finally, God stopped me and I felt Him ask, “Why are you trying so hard to be their leader? Let ME lead. Your job is to simply show them how to follow.”

MYTHIRDPLACE has become a home for me. The new roots that I have planted here are stronger and deeper than I could ever have imagined. It has given me the opportunity to see God in the eyes of beautiful, amazing, frustrating, confused, hurting, and loving teenagers here in Azusa. I thought M3P had tipped my world upside down. Little did I know, it was actually turning my world right side up again.

We’re confident in our call to walk through life with, and empower young people to live whole and abundant lives. Our ability to carry out our mission is directly affected by several factors, one of which is monetary resources. This is one of many areas in which we depend on YOU, our community, to come alongside and support us. Would you get in on what’s happening through MYTHIRDPLACE by making a financial investment? 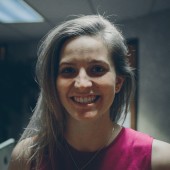 All stories by: Terri Gale

MYTHIRDPLACE BACK AT GOSPEL SING

By Michaela Steiner
In Event