COOKIN’ UP SOME COMMUNITY WITH AHS PRINCIPAL : MR. RUBALCABA

A couple weeks back, our teens and mentors were given the opportunity to cook a meal and engage in some team building activities, all instructed by Mr. Rubalcaba, Azusa High School Principal. On two consecutive days after school, he volunteered his time and joined the M3P Fam to teach first the middle school teens and then high school teens respectively.

Our very own Mikey G., Youth Intern and Mentor Extraordinaire,  was in on things and reflected on the atmosphere created by the day:

Mr. Rubalcaba throwin’ up the “3” for MYTHIRDPLACE… Nah, he was splitting teens up into three groups.

As I walked into the room on Thursday after school, I could not help but sense the beauty of the family that is MYTHIRDPLACE. Teens were gathered around a table, and Adrian was telling them that they would soon be taking cooking classes instructed by Mr. Rubalcaba. The teens seemed excited to begin their work with the friends and mentors that would walk alongside them. As the principal began to speak, I came to see that he had a true heart for the community he worked in and it wasn’t just a job to him. He was taking an hour out of his busy schedule to volunteer his time to build teenagers. He saw them as so much more than just the students he worked with at the local high school.

I was reminded of the quote “It takes a village to raise a child” because the building up of our teens is not a job that just MYTHIRDPLACE can do or just the local schools can do.

They must do it together as they work toward each teen’s potential to become somebody special one day.

Mr. Rubalcaba choppin’ it up with our teens.

As Mr. Rubalcaba carried on, he assigned three different groups-Team Guacamole, Team Fajitas, and Team Banana Pudding. Each team was assigned the task of creating the dish that their team was named after. As teens and mentors worked together to accomplish the task set before them, I was reminded of the beauty of community: we strengthen one another and we do far better work than if we ever did it alone. The teens that couldn’t cut right, stirred; the teams that couldn’t stir right, chopped. Each member had his or her job and each member contributed to the making of the final product.

As I watched all of this unfold, I also remembered the early Christians in the book of Acts and their example of community. I love the passage in Acts 2:42-47 where it discusses that each of the members were equal and had all things in common. They gave to each other as anyone had need and shared in the breaking of bread together daily.

After we cooked up this meal, we got to share in the delicious tastes of it together. We laughed together. We ate together. But most importantly, we learned from each other. It was a beautiful day to see the coming together of the M3P Fam.

Part of the M3P Fam breakin’ bread… Or… Fajitas.

Thanks, Mr. Rubalcaba, for taking the time to join us as our guest chef. We admire and appreciate your leadership, humility, and willingness to engage the community you serve, even outside the school gates. Mr. Magnusson, where you at? We’re coming for you next.

We’re confident in our call to walk through life with, and empower, young people to live whole and abundant lives. Our ability to carry out our mission is directly affected by several factors, one of which is monetary resources. This is one of many areas in which we depend on YOU, our community, to come alongside and support us. Would you get in on what’s happening through MYTHIRDPLACE by making a financial investment? 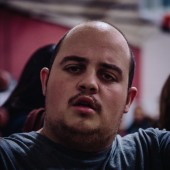 All stories by: Mikey G.

MYTHIRDPLACE BACK AT GOSPEL SING

By Michaela Steiner
In Event